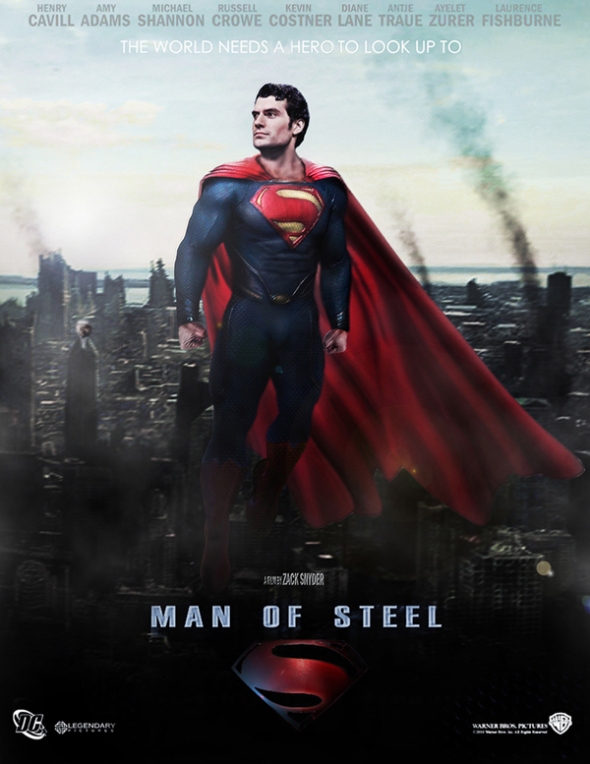 I rarely bother to attend the cinema any more. We have only one cinemaplex in Launceston, and it shows nothing but the shiniest and latest and crappiest and Hollywoodest movies. Of course, sometimes I wouldn’t mind seeing those — but since it costs me well over a hundred dollars to do so with my children (taking into account parking, tickets, fuel, food, and incidentals) it’s not usually worth my time. I’ll probably catch the new Hobbit flick at the cinema when it comes out. That will make… maybe the third time I’ve been, this year. Maybe. Might be the second.

Obviously, I didn’t go to see Man of Steel. And with the tenor of the reviews that followed, I was quietly pleased with that decision, no matter how much I like the Superman character from my earliest days of reading as a child. Instead, I bought the DVD for less than $20, and we watched it the other night in the comfort of our home cinema loft… with plenty of gin and tonic on hand for yours truly.

Maybe it was the G&T, but I found myself enjoying the film far more than I expected. From the critical noise, I was expecting something worse than Superman Returns, the slow, charmless and vapid 2006 clunker of a movie with Brandon Routh in the eponymous role. What I got was — well, not conventional Superman, no. But frankly, I felt it was the better for all that.

To me, the major flaw in this film lies in the attempt to do too much. The writers and director couldn’t manage to back away from the ongoing and highly irritating Christ metaphor: the Son sent to save us all. (At least poor old Supes didn’t die for our sins this time, as he did when Kevin Spacey dumped all that Kryptonite on him back in 2006). And then there’s the inevitable relationship-with-Lois, because you can’t make a Superman film without perky Lois Lane popping up, can you?

What interested me most were precisely the parts that most reviewers loathed. There’s the infamous mass-destruction fight sequences, of course, and the fact that the Superman character is, by the end, driven to deliberately kill another being. For most viewers, it seems these two things were completely unacceptable. For me, on the other hand, they seemed like a deliberate and very nearly interesting effort to offer a side of Superman never really explored elsewhere.

(As an aside — who has read the famous Larry Niven essay “Man of Steel, Woman of Kleenex“? If you haven’t, then follow the link. It’s a hilarious look at another aspect of the problem I’m about to cover.)

During the film, the director Snyder repeatedly shows us what it costs Kal-El/Clark Kent to grow up in a society of people without his powers. Early in his school years, he loses control of his super-senses, and he is bombarded by images and sounds that threaten to overwhelm his young mind. He desperately restrains himself when antagonised by a pack of school bullies; and we see how much effort it takes to do so in the shape of a steel fence-post deformed by his straining grip.

At the beginning of the film, Clark/Kal-El is a loner and a drifter, moving from job to job in anonymity. Oh, sure: he does the obligatory heroic stuff, but he has to move along, and hide from it. Most importantly, he makes no real friends, develops no lasting relationships.

And to me, Snyder’s point is clear: he can’t.

Ask yourself this: how do you form friendships if you can’t carry out the simplest of social behaviours? Play sports? The slightest lapse in concentration might send a ball into orbit, or irretrievably mangle an opponent. And what about handshakes, or embraces? Try to imagine that everyone — everyone! — you ever touched in any way was made of wet tissue paper. Try to imagine that even sneezing might kill them. And no, you really can’t have a few drinks tonight. Oh, and sex? Better see that Larry Niven essay, eh?

This is the Superman Snyder was trying for. And I think he almost got there.

The grand smash-up battle sequences aren’t just CG-Eye candy. They’re important. You’re meant to be shocked by the scale of the destruction. This is what it means to let Superman off the chain, folks. This is what happens when he doesn’t pull his punches. Does it look like he revels in the battle? Not as much as he should. For the first time in his thirty-three years (sigh… enough with the Christ crap already!) he can push himself to his fullest, unleash everything he’s got. For the first time ever, he’s got a reason to stop pretending, stop holding everything back, and be himself.

Is Henry Cavill’s performance wooden? I’ve heard it called that. Maybe it was. But I’d argue that it was meant to imply absolute and utter restraint. Cavill’s Superman has to be calm and measured, or the people around him will die. Yes, it’s possible Cavill himself (and Snyder) didn’t have the chops to suggest that. But a slightly more focused script could have made it much easier, much clearer.

Even the final sequence — the moment where Superman kills Zod — that sent the fans into a raging death spiral… even that seems reasonable to me. Superman never kills, right?

Well… why the fuck not? Are we honestly supposed to believe that it’s his aw-shucks good-guy upbringing in Kansas which produces this ironclad rule? Frankly, the death penalty is a very American thing indeed these days. The idea of Kal-El as a sort of ‘natural boy scout’ is unbelievable crap, a hangover from a period when the US had all kinds of delusions about its moral superiority. The truth is that there’s no clear reason for a modern Superman to avoid killing the bad guys who insist on coming back, over and over again, to terrorise his world and people…

…unless Superman has already had an encounter with the death penalty. Up close and personal. Say… if he was driven, against his will, to kill the last Kryptonian other than himself in hand-to-hand, unarmed combat.

Because the theme of this movie really ought to have been loneliness, and the desperation that comes with absolute isolation from your fellow beings. Clark Kent, behind his glasses forever watching a world that he can never, ever be a real part of…

…some day, I’d like to see them make a movie out of that Superman. But until then, this is a rather better effort than I’d anticipated, and I don’t resent the time I spent watching it.

← Review: Memoirs Of A Geisha — Arthur Golden (1997)
Learning From The Mistakes Of Others →

Dirk Flinthart: writer, raconteur, occasional rakehell. This is the Last Bastion. This is Flinthart's home.